Halfway between river Seine and Paris 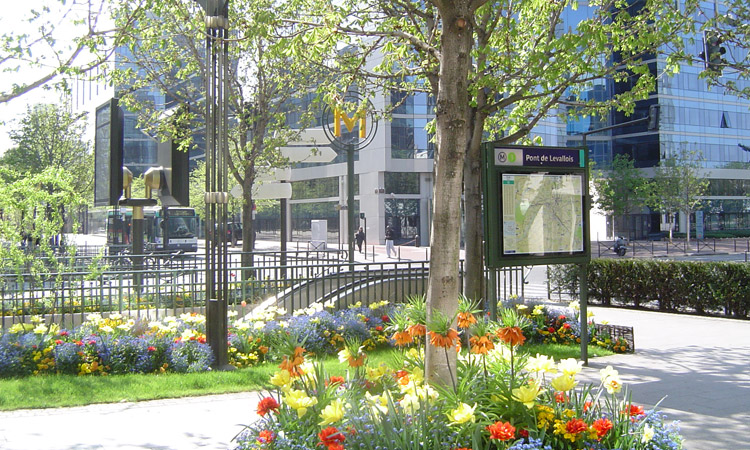 If Paris were to have a twenty-first arrondissement (district), it would be Levallois-Perret which, with its nearly perfect square shape, ‘prolongs’ Paris down to the river bank.

The historic birthplace of the fine car bodies and vehicle engineering, Levallois used to include the poor districts and the affluent industrialists’ residences. Nowadays, its sixty-three thousand inhabitants are mostly high income, dynamic young urban professionals. The commune is quite lively and commercial and hosts nearly four thousand companies for a total of sixty thousand jobs.

The city may be divided into four districts : Alsace, Jean-Zay, Front-de-Seine and Général Leclerc. The first one, originally the wasteland along the ring-road, then outrageously turned into a concrete jungle and progressively reshaped, remains the more affordable. On the opposite, the Front-de-Seine (the River Seine Waterfront) is much more residential and in full renewal. The whole district is built around large avenues and includes the pedestrian malls of Quai Michelet and of the Île de la Jatte redeveloped and landscaped. This sector is in itself an essential section of the green framework of the city, located in a residential district, not far from the town-center and particularly well served by the public transports (SNCF train station, bus), even if there is there a lack of shops. With the development of Parc Collange, it is in full renewal.

All sectors are not sought after the same way

The potential purchasers are mostly working couples, often top executives, with one or two children. They enjoy the dynamic and hyper-secured aspect of the city – an average of a camera every fifty meters.

The most sought-after district remains the streets around the town-hall, where the fine Haussmanian apartments are traded at ten thousand euros per square mile. Small areas are also attractive as they mean a positive outlook for commercial rent. In the ring-road and Clichy-Levallois station areas, the sector surrounding So Ouest commercial mall is somewhat less sought-after.

In the heart of district Leclerc, the two-room apartments sell well, as they both attract the first-time buyers and the parents looking for their child’s first home.

Though less prestigious than its next neighbour Neuilly, Levallois is the delight of the owners hoping for an excellent quality of life. It is a fact that the charm of the city and the ‘village’ atmosphere (especially the center) attract more and more the people wishing to purchase a fine property. The city is no doubt the French and foreign great fortunes’ favourite, but also the one of the young and the seniors wishing to settle in a place known for its calm and security.